For 39 years from 1924 to 1963, Julian P. Graham, nicknamed “Spike” from his early years as a semi-pro baseball player, was the independent, official Photographer for Del Monte Properties, which is known today as the Pebble Beach Company. Graham’s legacy is over 40,000 photographs and negatives which provide a glimpse, frozen in time, into the world of the rich and famous that symbolize the spirit, fashion and elegance of the classic years. Graham photographed the many famous, beautiful and glamorous people that visited, played and lived on the Monterey Peninsula. His photographs were known to millions of people throughout the world by appearing in magazines such as Life and National Geographic, national and international newspapers, books, fashion layouts, and promotional material used for advertising the Pebble Beach Company. Graham’s Camera Shop, located across from the main entrance to The Lodge at Pebble Beach, also sold photographic prints to visitors and companies.

Graham’s photographs chronicle the history of the Monterey Peninsula which includes the creation of Cypress Point Golf Club and the Monterey Peninsula Country Club. Of great significance for Graham’s artist eye was the established Pebble Beach Golf Links, which opened in 1919, and all the notable men and women who played those three courses.

As the independent, official Photographer, Graham photographed Kings and Queens, Presidents of the United States, heads of Governments, movie stars, artists, and all the great men of golf. Graham’s photographs include the Crosby Clambake, polo matches and their gallery, sailing regattas, and the famous Pebble Beach Concours d’Elegance which his wife, Gwenn Graham, created and ran for 18 years until her death in October 1968. Other photographs highlight the car races, dog shows, horse shows, 3 day eventing of hunter jumpers, and horse racing as well as the steeplechase. Graham photographed the gun shooting events, tennis stars and tennis matches, archery, diving, as well as artistic moments of beauty of the Monterey Peninsula.Graham also chronicled the creation and layout of Pasatiempo Golf Club in Santa Cruz, all with many images of the famous golf architect, Dr. Alister MacKenzie and renowned socialite sportswoman, Marion Hollins.

What made Graham’s photographs so remarkable and memorable was the scenic vantage points from which he captured the excitement of the moment with the stunning Monterey Peninsula’s scenery as the backdrop. Graham’s candid shots seize the thrill of the moment in the action shots of golf, polo, tennis, car racing, horse eventing, sailing, diving and many other challenging sports. This was his hallmark of his 39 years of work.

Graham was born on March 13, 1886 in Washington, D.C. into the family of Horace Alexander Graham, who with his wife, Laura E. Wright had 5 children. Horace A. Graham made his living as a printer. While in his teens, Julian had a short lived career as a semi-pro baseball player before finding photography, which was the love of his life. Graham traveled the United States as an itinerant photographer and in the early 1920’s arrived in Carmel, California. He met and worked for J.F. Devendorf, the town’s founder, who introduced him to Johan Hagemeyer, a renowned portraitist, who is now considered one of the “old masters”.

Graham and Hagemeyer grew to be close friends and with Hagemeyer’s help, Graham was able to further develop and refine his photographic skills. Hagemeyer opened a photographic studio in Carmel in 1923 and the town’s first art gallery in 1924. Another of Graham’s friend for many years was Ansel Adams, who came to Graham’s house in Carmel Valley for dinners where they would discuss light, shadow, and various photographic darkroom techniques and styles.

In February, 1924, Samuel F. B. Morse, the Chairman of the Board of Del Monte Properties Co., offered Graham a job at the famous old Hotel Del Monte, which is now the Naval Postgraduate School. Graham agreed to stay “a little while”, which lasted 39 years until his death at his home in Carmel Valley in October of 1963. Graham’s original photography studio was located in the old Hotel Del Monte from 1924 to 1944. In the great fire of 1924 that razed the old Hotel Del Monte, many of Graham’s negatives were lost. Graham set up his new darkroom temporarily in the bowling alley at the Del Monte Baths on Monterey Beach.

In November of 1937, Graham and Herbert Cerwin, the public relations man for the Del Monte Lodge, traveled to the Far East. Graham as a foreign war photographer and Cerwin as a reporter. The Japanese had just bombed and sunk the gunboat, USS Panay, on the Yangtze River which precipitated an international incident. Graham and Cerwin traveled to Canton where Graham took photographs of the world’s first air bombing raids with all of its atrocities. In Canton, there were no air raid shelters, no emergency hospitals, no organized civilian defense-just hundreds of maimed bodies lying on the streets and roads. Graham took photographs after each bombing run by the Japanese of the death and destruction in Canton. Graham and Cerwin’s travels are chronicled in Cerwin’s book, “In Search of Something”.

For a brief time, during World War II, Graham’s moved his studio to Menlo Park. In 1944, when the shops opened at Pebble Beach across from the Del Monte Lodge, now The Lodge at Pebble Beach, he then moved his studio and Camera Shop into the end shop where he remained in business until his death. Upon Graham’s death, Samuel F.B. Morse, Chairman of the Board of the Del Monte Properties Co. and long-time friend, said “Spike did a magnificent job all of his life for us and for the community. His photographs show great talent. His death is a serious loss to us. We will miss him tremendously.” 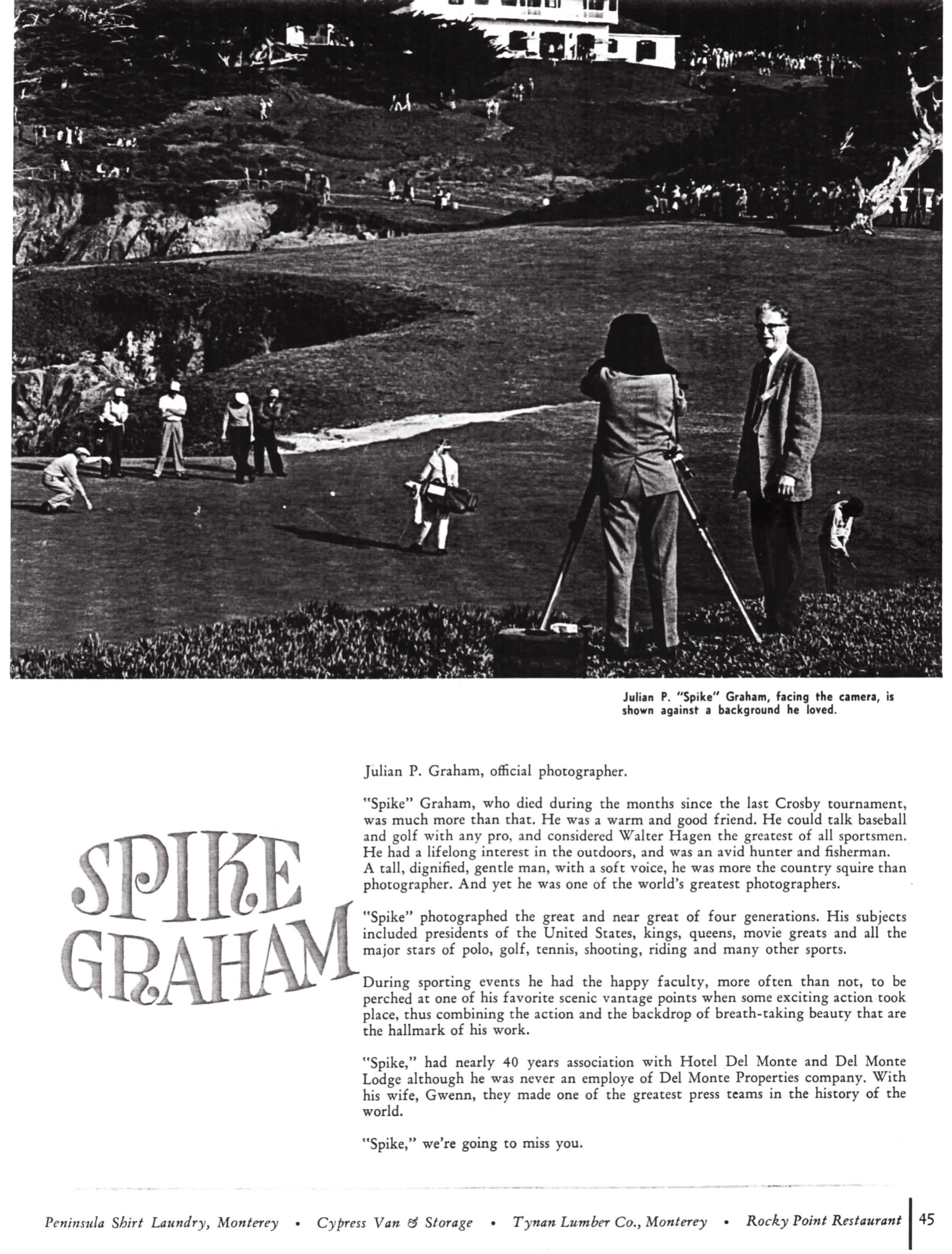